How Did the Seventieth Week Play Out in History?

Acts 7 Fulfillment of the Seventieth Week of Daniel Chapter 9

Our brother Davis contacted me with questions concerning the Seventy Weeks prophecy in Daniel 9 and why and how it was fulfilled in the events in the Book of Acts chapter 7. These are some of my thoughts on it. In them, I wish to suggest that there are definite items in the Seventieth Week, but also there are other aspects of the prophecy that seem rather mysterious and what is mysterious should not be disregarded or without very strong reasons interpreted in the light of the Book of Acts, but rather in light of the Book of Revelation.

Years ago I was in a heated exchange with a Historicist (which is one of the so-called ‘Four Views’ of Bible prophecy, standard among Christians around the world). We hotly disagreed on when and how Daniel 9’s Seventieth Week came to fruition. This fellow was determined that the last week was fulfilled by A.D.35 or so (and that, claimed he, was fulfilled in the stoning and death of St. Stephen).

The following passage, given to the Prophet Daniel by the angel Gabriel, six hundred years before the Incarnation, reads as follows:

“Seventy weeks are determined upon thy people and upon thy holy city, to finish the transgression, and to make an end of sins, and to make reconciliation for iniquity, and to bring in everlasting righteousness, and to seal up the vision and prophecy, and to anoint the most Holy.

25 Know therefore and understand, that from the going forth of the commandment to restore and to build Jerusalem unto the Messiah the Prince shall be seven weeks, and threescore and two weeks: the street shall be built again, and the wall, even in troublous times.

26 And after threescore and two weeks shall Messiah be cut off, but not for himself: and the people of the prince that shall come shall destroy the city and the sanctuary; and the end thereof shall be with a flood, and unto the end of the war desolations are determined.

27 And he shall confirm the covenant with many for one week: and in the midst of the week he shall cause the sacrifice and the oblation to cease, and for the overspreading of abominations he shall make it desolate, even until the consummation, and that determined shall be poured upon the desolate.”

characterized by a stoning, but by the death of the Messiah (and not for himself) and the destruction of the city and the sanctuary by the people of the prince that shall come. The final verse in the chapter makes it clear that the Seventieth Week is characterized by something that will happen “in the middle of the week:” the end of the sacrifices and oblations during a time of “wars and desolations.”

My very first reaction to reading the entirety of Daniel 9 and paying special attention to its ending leads me to believe it would best find its natural setting in Revelation 11:1-2; 13:1-17, and 17:7-17 rather than the stoning of a pious individual three decades earlier.

Now, take a good look in all of Acts and see if there any indication that either people or prince (of any nation or of any kind) came to Jerusalem to destroy it? Is there any thing in all of Acts that suggests that Stephen's martyrdom fulfilled anything Daniel's prophecy said would happen in the 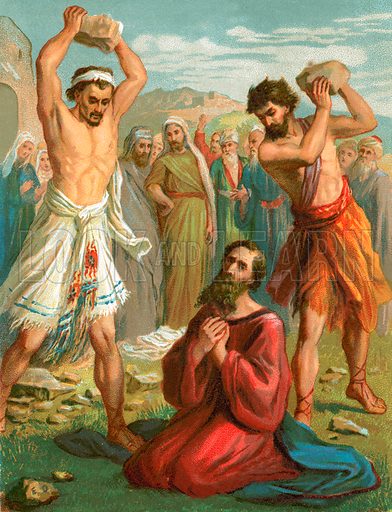 middle of the week?  Did Jewish sacrifices in the Second Temple cease and desist when Stephen died?  Was a Jewish war or did any wartime desolation ravage the land of Judæa during the period that Luke records for us in Acts?  These are questions we must ask ourselves; these are points we must emphasize in our dialogues with Historicists and even Dispensationalists.

Now, it is easy to fall into another trap: Denial of the gap. Denying the gap is a trap because nobody can prove that Jesus died on the Cross back to back with the Destruction of the City and the sanctuary—that’s the eerie and mysterious part of the Seventieth Week prophecy! In other words, denying the gap (however big or small it may be) is still “begging the question.” Nothing in Acts answers to anything in Daniel 9. But what does answer to it are the events in the Book of Revelation and (conversely) in Josephus. Christ died some forty years before the Temple fell, but in the prophecy the death of the Messiah is depicted as ADJACENT to the city’s demise (neither I nor anyone else can tell you why; God alone knows why!).

Now, we could go back and forth and dispute this forever, but this much is clear: If the fulfillment of Daniel 9:26-27 is put in Acts 7:51-60, the Book of Revelation (from chapters 11 through 19) will be left out in the proverbial cold, so to speak.  But if you lean towards the Destruction of the city and the sanctuary as a fulfillment of Daniel's prophecy, you are also going with Jesus (Matthew 24:15 cf. Mark 13:14), as he, too, saw the abomination of desolation spoken by Daniel as being fulfilled in the Fall of the City and not in the stoning and death of a lone Christian.

Supplemental notes for further research into the circumstances surrounding the abomination of desolation of the Second Temple as it is preserved in the writings of the Jewish historian, Mattathias Flavious Josephus.

“And the judgment has sat, and they shall remove his dominion to abolish it, and to destroy it utterly. And the kingdom and the power and the greatness of the kings that are under the whole heaven were given to the saints of the Most High; and his kingdom is an everlasting kingdom, and all powers shall serve and obey him. Hitherto is the end of the matter. As for me, Daniel, my thoughts greatly troubled me, and my countenance was changed: but I kept the matter in my heart”(Daniel 7:26-28 LXX).

Nowhere in the Bible, in general, or the New Testament, in particular, is there prophecy or warrant to believe that God intended to take the kingdom of God away from the Jews and give it to the Romans.