Is Jesus Just a Copy of the Pagan Gods?

Caption: Silver star marker at the place where Jesus was born in Bethlehem, Judæa 20 centuries ago.  Source: encirclephotos.com 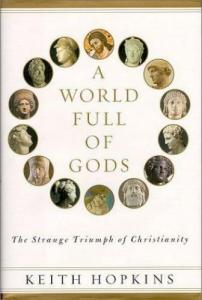 How did Christianity succeed where other religions populating the early Roman Empire (and even some in the Holy Land that competed with Biblical Judaism) failed?  This book is delightful reading, but may still miss the real answer, because, where Hopkins thinks the success of Christians came about based on how they 'marketed' their faith, the truer answer seems to be that the prophecies about the Temple, the priesthood and Aristocratic Jerusalem along with the Zealot and Sicarii nationalist armies coming to two sudden ends in less than a century might just hit the nail on the head!  The Christians never would have succeeded if Christ did not intervene and fulfill the prophecies he uttered and promised with oaths, plain and simple!

And so, in order for a thing or an idea to beat the competition it must first prove or demonstrate itself to be valid.  The fulfillment of Bible prophecy did just that and that is the real reason why Christians were able to triumph as the 'nominee' and take what the 'incumbent' mother religion thought she was entitled to: the Kingdom of God.